We are pleased that you are visiting our website to learn more about our lovely little church.   Visitors to our church and community will always receive a warm and heartfelt welcome.

We are a very small congregation striving to attend to the spiritual needs of our small Catholic community as well as visitors from wherever they may come.

Blessed Sacrament Mission Church is situated on the ocean bluff with magnificent views of the Pacific Ocean.

Please wear masks and practice social distancing from those not in your immediate household.

Prayer to St. Michael the Archangel 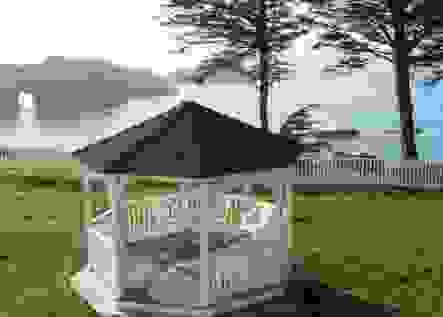 What an impressive location to view the waves thundering against the cliffs and the splendid painted sky as the sun sinks in the west.  It would be difficult to imagine a more picturesque location to take your wedding vows or renewal!

This is the original organ in Blessed Sacrament Church; another modern organ is near the sanctuary.

Weddings on the Coast

Are you looking for an idyllic out-of-the way romantic location for that single most  memorable event in your life – your wedding day? Are you are searching for a breathtaking location for the most significant bond you will ever make?

Or perhaps you wish to renew your wedding vows.

Consider the beautiful, historic Blessed Sacrament Church for a truly perfect setting for your special day located in the quaint coastal village of Elk on the Northern California coast.  This warm and charming church is ideal for small intimate services and can accommodate up to 100 people.

The church sits right on the ocean bluff with a large private backyard featuring a gorgeous gazebo and spectacular view of the sea providing a magnificent backdrop for your wedding festivities.

Your wedding day will be a uniquely memorable experience with a distinct touch of romance and magic in this incredibly picturesque location.

There are several fine accommodations and restaurant facilities in the town of Elk for your reception or honeymoon.  Contact Sacred Rock Resort, Elk Cove Inn or Harbor House Inn for availability and pricing.   For additional information on Elk, CA (or is it Greenwood!) check this website - the Greenwood Community Center in Elk can be used for wedding receptions, and other events.  The PDF on this link provides rental rates, etc.

There are also accommodations in near-by Mendocino, California.

Be sure to coordinate with Blessed Sacrament - see below!

The Blessed Sacrament Catholic Church in Elk has recently seen an uptick in activity. Dedicated in 1896, the church served for many years as the spiritual center for the many Irish, Italian, and other immigrant Catholic families living between Mendocino to the north and Point Arena to the south. Over the years, as the lumber mills closed or burned down and employment opportunities dried up, families moved out of the area. Like many other churches, the decreasing size of the congregation put an increasing strain on the remaining Catholics to maintain its continuing viability. For the last twenty years or so, the once vibrant parish has functioned as a mission chapel of St. Anthony of Padua Church in Mendocino.

Faced with the possibility that the Blessed Sacrament Church might be closed altogether, in 2019 the remaining parishioners in Elk approached the Catholic Bishop of Santa Rosa, inquiring if the Diocese might take over the management of the church rectory (vacant for many decades) as a possible diocesan facility for private, spiritual retreats. Although the Bishop did not foresee that as a reasonable option, he nonetheless offered a counter proposal. As Divine Providence would have it, a semi-retired priest already known to the Bishop was looking for just such an arrangement and had already discussed with him various possibilities along the northern California coast.

In November of last year, Father Arsenius (63) took up residence at the rectory adjoining the Blessed Sacrament Church. This Priest was born and grew up in Southern California, “coincidentally” attending the same private high school there as did another Elk resident: in fact, he was classmates with her younger brother. There he was graduated with honors, near the top of his class of three hundred-plus students, with special interests in mathematics, music, and foreign languages. From there he was admitted to the seminary of the Society of the Divine Word (a missionary organization) at their college in Iowa; and a few years later was graduated from there with a baccalaureate degree Cum Laudein English Literature, with minor degrees in Missiology and Cultural Anthropology .

Prior to his 2006 ordination as Priest, Father Arsenius worked for a number of years as a fire communications officer with a large, municipal fire department and with a 9-1-1 communications center; as a firefighter and fire officer, emergency medical technician, deputy state fire marshal, chief state training officer for statewide hazardous material emergency response teams, adjunct faculty to the U.S. National Fire Academy; has served as special expert to the National Fire Protection Association and Federal Emergency Management Agency in educational methodology; and holds state certification in fire administration. In 1989 he co-authored two training courses for hazardous material first responders that was adopted by the International Society of Fire Service Instructors and subsequently in use in thirty-five states and several countries throughout the world, translated even into Persian. That same year he joined a team of four to travel to Beijing, China (accidentally concurrent with the Tiananmen Square protests), to present a symposium on emergency cardiac care in the field (“citizen CPR”) to hospital administrators and medical professionals from across China. In 1991, he traveled to Brazil to train members of the Firefighter Corps of the São Paulo State Military Police in advanced-level hazardous materials emergency response.

Public safety, however, is only one of his interests. Having studied piano as a child, he later included organ, serving as one of the organists to his large suburban parish church in Southern California. In the seminary he assisted as one of the organists there, and as assistant organist at a nearby minor basilica. This interest continued in the monastery, where he served also as assistant organist and as a member of the schola cantorum. Since 1998 he has served as cantor and choirmaster of a monastery in the Pacific Northwest, specializing in sacred music and Gregorian chant.

As music, mathematics, and language are closely related, over the years Father Arsenius has studied English, Latin, Spanish, French, German, Russian, and Mandarin. Like musical skills, however, facility in language is maintained through frequent use. These days, he uses Latin most often, and Spanish only occasionally.

Along the way, Father Arsenius discerned the vocation to a more contemplative life. He spent several years as a vowed monk of the Order of Saint Benedict at a large abbey in the Midwest, and with the Carthusian Order at its priory in New England.

For the last twenty-one years, Father Arsenius has been monk and anchorite, living in a small, rustic hermitage in the forest on the east slopes of the Cascade Mountain Range in the high desert that is Central Oregon. Coming down from 4,300 feet elevation there to almost sea level here was something of a shock, but he doesn’t miss the sub-zero temperatures and biting wind chill at all. He is pleased to find a very well-maintained facility that is a veritable jewel among the churches along the Northern California coast – and a million-dollar view of Greenwood Cove and panorama of the Pacific Ocean. What crowns it all, he says, is the wholehearted welcome he’s received from Catholics and locals alike. He’s looking forward to repaying his debt of gratitude.

The Holy Sacrifice of the Mass is now once again offered on Sunday mornings at the Blessed Sacrament Church in Elk. Father Arsenius ordinarily offers Holy Mass (and administers the other Sacraments and sacramentals, according to the older usage) – also known as the Traditional Latin Mass (TLM), the “extraordinary form”, the “Tridentine” Mass. Holy Mass is offered daily at Blessed Sacrament Church: on Sundays at 10 AM (Latin), on weekdays and Saturday mornings usually at 8:30 AM (call ahead to confirm time: 707-877-3312), and on Saturday evenings at 4 PM (English).

As the great bell sounds once again on Sunday mornings at Blessed Sacrament Church in Elk, Father Arsenius says to one and all: “Dominus vobiscum.”*

Review us on Yelp